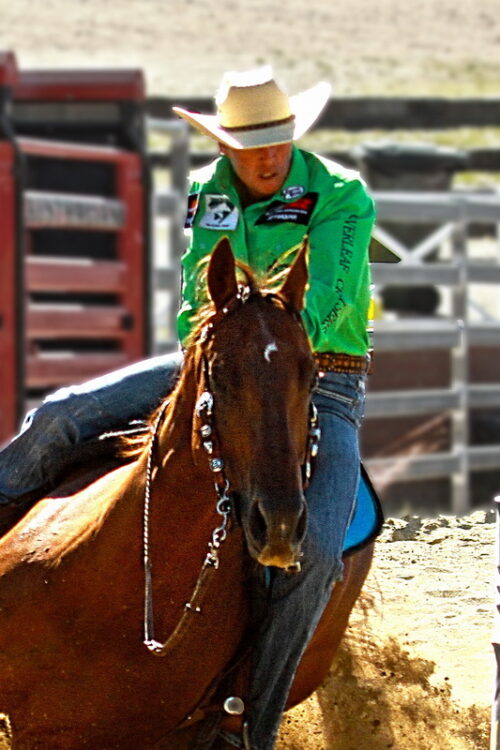 Adele Edwards has won every major barrel race in the eastern states in the last ten years. She is renowned as a top level breeder, trainer and competitor.

Adele and her husband Darrell own 3D Quarter Horses. They have bred some of the most successful barrel racing horses in Australia from a very small and select band of broodmares. Adele is a proven trainer of young horses. She has won all major barrel racing futurities in the past few years aboard horses that she has trained herself. These horses have then gone on to be successful for other riders. She holds several national titles in barrel racing which she has won on different horses. Adele further proved her worth as a barrel racing trainer when she won the Equitana Australian Open Barrel Race in 2012 and 2018 on her gelding Moon Roc.

The popularity of Adele’s methods has seen her in demand as a clinician. She emphasises the importance of good horsemanship to ensure that barrel horses are able to excel in the arena. She has a simple formula for barrel racing success that can be followed by even beginners to the sport. Her strong horsemanship skills have made her successful at retraining problem horses and helping those whose horses are not performing at their best. She does this in a positive and calm manner ensuring that both horse and rider can understand what she is trying to achieve. Adele has spent time training with the best in the world to hone her skills. She is a well-respected horsewoman who has something to offer anyone interested in barrel racing.

Barrel racing is a fun and exhilarating sport, but you don’t have to be a speed demon to get started!

Adele will cover everything you need to know to get started in barrel racing; from how to find a club near you, the basic equipment you need through to the basic exercises that will make sure you and your horse have fun and stay safe.

Sunday November 14th
9:30 am to 10:15 am
DEG Australia Demonstration Arena

The common problems that barrel racers face when racing the clock and the easy ways to overcome them.

This demonstration will cover the basic problems that barrel racers face every day. Issues such as horses not going in the arena, knocked barrels and wide turns. Everyone interested in barrel racing, from first timers to experts, will learn about how to be safer and faster when competing.