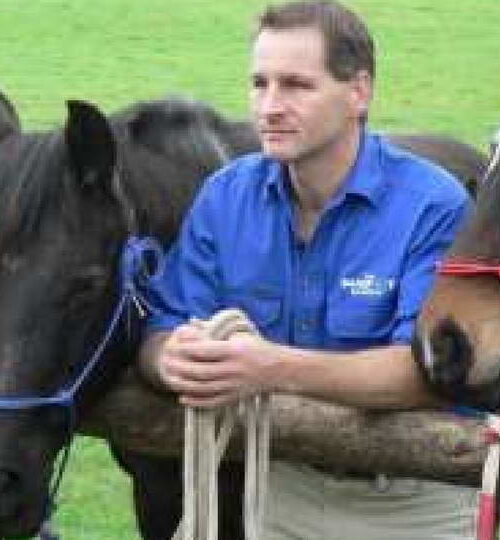 Andrew began his working life as a traditional farrier in 1990 after completing an applied science degree and shod horses full time for quite some years. He is a trade accredited and race track licensed farrier.

About 19 years ago, his career began turning away from tradition and he started exploring the concept of barefoot rehabilitation as an alternative to corrective shoeing. This move was driven by the frustration of not being able to provide long term solutions to common chronic lameness problems within the confines of traditional farriery. With his wife Nicky he set up a bare hoofcare rehabilitation facility at the family farm (Mayfield) in central Victoria to treat the increasing number of chronically lame horses that they were being asked to help, particularly those with serious laminitis. Nearly two decades later and Mayfield continues to have a steady stream of lame horses passing through and they have a very high success rate. They also became increasingly aware that the best hooves are not those trimmed by the best therapists every six weeks, but the best hooves are those trimmed by horse owners every two or three weeks, so they began teaching horse owners how to maintain their own hooves and now run popular workshops Australia wide.

In 2008 they opened the Australian College of Equine Podiotherapy. They are writers of the units of competency and head lecturers of the nationally accredited diploma level course. Some years ago (after a potentially career ending injury) Andrew also completed a journalism course and now writes hoofcare related articles that aim to disseminate current equine hoof science to the wider equine community. Andrew continues to work as a podiotherapist/farrier on a large number of horses across a wide range of equestrian disciplines; always striving to blend the contradicting goals of equine athletic performance and long term soundness.

This lecture will showcase alternatives for protecting equine hooves effectively and sustainably; addressing that elusive goal of achieving both athletic performance and long term soundness.

It will be presented by Farrier Andrew Bowe who is working in the middle ground between bare hoofcare and metal shoeing. First up, Andrew Bowe will frame the scene with a discussion on why working equines need hoof protection and why hoof function must be preserved for optimizing the chance of long term soundness.

Andrew will then showcase a number of different options that cover most bases for working equines, with a focus on affordability and practicality.