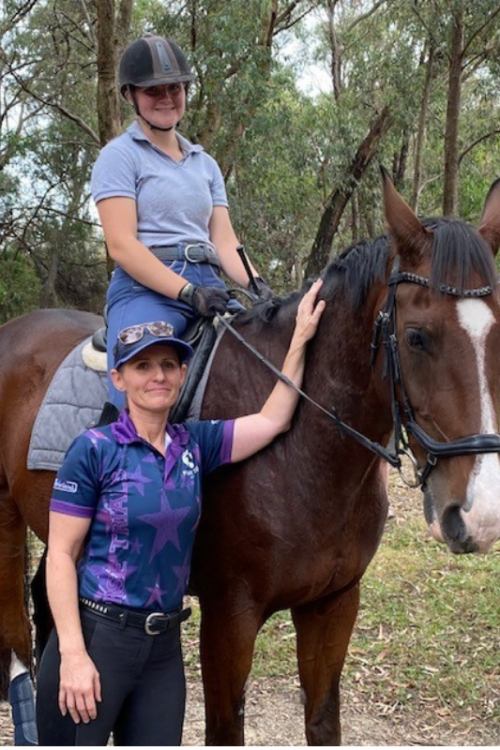 Coming from a non-horsey family, Kathleen started riding as a teenager and joined Tooradin Pony Club. Each rally day began with a 45 minute ride with her sister, across a busy highway to the grounds. Attending pony club was valued as it was the only riding tuition and horse-mastership education the girls received at that time. The Francis family were very influential. Kathleen can recall one rally being told by Judy, after her horse had dislodged her on the same fence for the third time, that her day was done and she was quite relieved. At that time, your pony club journey came to an end when aged 21.

Kathleen found a mentor in coach and competitor Rob Clay. Rob encouraged Kathleen to purchase a young warmblood and train it through the EA Levels. Kathleen and Blackall Park Karnival would ride to EA Advanced level with success. It was also Rob who encouraged Kathleen to begin her coaching journey, sending some little riders her way. Kathleen enjoyed this role and proceeded to gain her Pony Club Australia Preliminary and Level 1 accreditations and coach at some local pony clubs. It was at a pony club rally that Kathleen ran into Sally Francis who encouraged her to join the zone coaches panel and assist with some certificate assessing. Sally Francis continued to mentor Kathleen in this role and encouraged her to become Zone Chief Instructor. Kathleen held this role for 7 years, volunteering and giving back to an organisation that she had herself received much from. During her time as Zone Chief Instructor, Kathleen continued to gain mentorship from Sally and other members of the SMZ DCI/ZA panel and worked with many riders achieving their higher certificates by organising clinics and assessment opportunities.

In 2020, Kathleen began her current role at Pony Club Victoria as Coaching Director. She is enjoying the challenge of supporting the states coaches, riders and clubs.

Focus will be on techniques used by pony club coaches to keep lessons fun but with an emphasis on correct skill techniques being practiced with some horse-mastership included. Lesson will have rider’s displaying their skills with a small obstacle course of bending cones (to show their skill at navigating turns), stepping stones (to show skill of mount/dismount), quiz questions (to test riders knowledge) and a small jump.

There will be interaction with audience and prizes to give away.