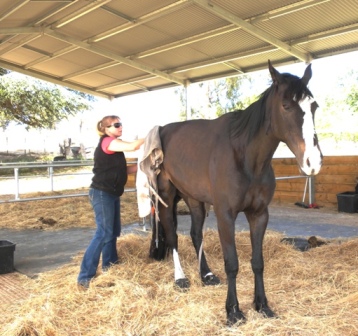 Nicole’s passion is horse nutrition, she devotes her time to client education through online help and lectures to clubs and community groups on horse care and nutrition. She also writes units of competency and articles and is a contributor to the Textbook ‘The pony that did not diet’ on laminitis prevention and rehabilitation.

With her husband, Andrew Bowe, she has been running a bare hoofcare rehabilitation facility at the family farm (Mayfield) in central Victoria for nearly two decades. Here they treat the increasing number of chronically lame horses that they are being asked to help, particularly those with serious laminitis. There is a steady stream of lame horses passing through the rehabilitation centre and they have a very high success rate. Managing Mayfield Barefoot Rehabilitation and Retirement Agistment centre includes assessing each individual case, determining the cause of the condition and formulating a treatment plan. Nursing and diets need to be formulated according to individual needs. Upon going home Nicole assists horse owners with nutritional advice for the future prevention of laminitis episodes.

Andrew and Nicole also became increasingly aware that the best hooves are not those trimmed by the best therapists every six weeks, but the best hooves are those trimmed by horse owners every two or three weeks. They began teaching horse owners how to maintain their own hooves and now run popular Maintenance trimming workshops Australia wide. In 2008 they opened the Australian College of Equine Podiotherapy. They are writers of the units of competency and head lecturers of the nationally accredited diploma level course. Andrew and Nicole have also organised and run the The Bowker Lectures Conferences in Australia. As you can see Education of horse owners in Australia is their passion in more levels than one.

This lecture will cover the basics of correct equine nutrition as it relates to the hoof; hoof health is however a litmus test to the overall health of the horse. Topics covered will be the unique digestive system of the horse, the five basic elements of nutrition and common factors causing poor hoof health/growth.

Nicole will share many handy hints and tips to ensure our equine friends receive optimum nutrition which will in turn prevent laminitis. Presented by Nicole Bowe who has been studying and putting into practice horse nutrition for over 30 years. Nicole has also been teaching nutrition and feeding the hoof for 10 years.