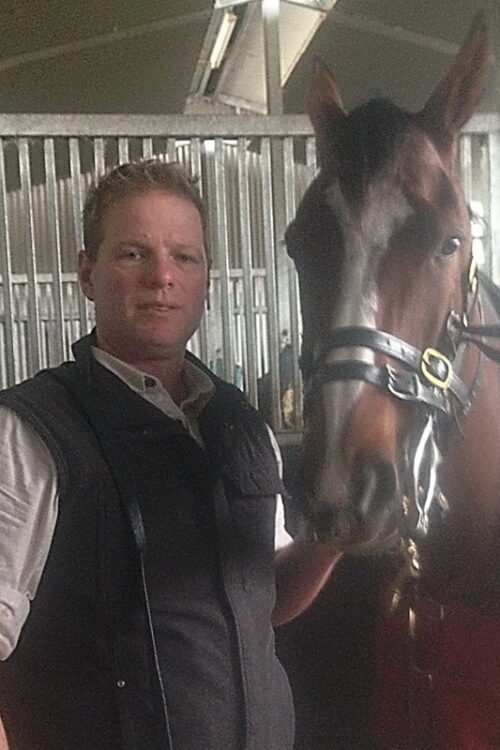 Shaun has had a life long association with horses. Growing up in a dressage training facility he competed in many disciplines until Quarter horses took his interest.

In 1992 he moved from South Australia to Drouin in Victoria to work with Paul and Jo Davenport breaking in, preparing and showing horses of various breeds both in Victoria and interstate. In 1995 he started a farriery apprenticeship with highly respected performance horse farrier Paul Smith on the Mornington Peninsular. During that time Shaun took a keen interest in farrier competitions and competed with some success. In 1998 after winning the high point intermediate competitor and the high point apprentice at the National championships he was chosen to represent Australia in the cultural exchange program to the USA run between the two associations. This was a 4 month trip around America living and working with some of the best American farriers at the time culminating with competing at the Texas Championships, finishing 4th overall.

After completing his apprenticeship he moved to Longwood in Victorias North East with his wife Jodie to start a farriery business and run the couples quarter horse breeding program. In 2005 with 3 bouncing baby girls in the family Shaun looked into equine dentistry as a career option. The equine dental association was the clear stand out as the pathway. Providing thorough training and practising ethical and humane procedures, members of the EDAA serviced most of the racing stables and many of the top equestrians as well as pony clubs and the small horse owner. After completing the certificate 4 in Equine dentistry Shaun set up business servicing most of North East Victoria and stretching into southern NSW. He has also worked overseas with his last trip being to Northern Farm in Japan.

Shaun has recently been voted in as the Vice president of the EDAA. Whilst no longer breeding quarter horses or competing he still has a passion for providing high quality dental care.

The reasons why we do horses teeth.

The reasons why we do horses teeth. Dental anatomy.  Bits and Bitting.  How your bit affects the mouth. Dental care for different performance horses