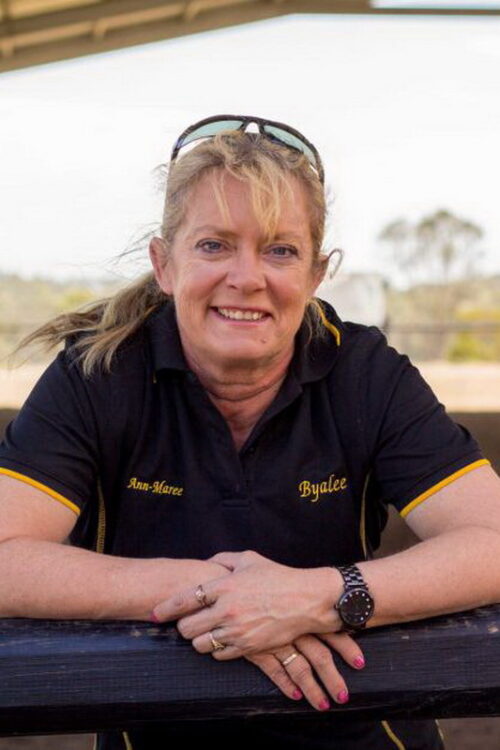 SUCCESS AGAINST THE ODDS – No one would buy Ann-Maree a horse when she was a child. No one would pay for riding lessons. Daughter of a RAAF sergeant, there were no equestrian dreams coming true as she moved town every two years and attended 11 different schools. But, from her first riding lesson at 20, she became, four years later, a Level 1 EA coach, elementary dressage judge and FEI competitor with two self-trained horses.

She doesn’t know the meaning of the word ‘can’t’ and it is banned on her arena.  From learning walk pirouettes out of a book against a barbed wire fence and teaching her horse to leg-yield against 44-gallon drums, she has forged herself into a three-time Grand Prix competitor, top coach and coach educator, and equestrian psychologist specialising in ‘achieving the dream’, competing at State, National and CDI level in Australia and the UK.  From a $400 galloway bought from the classifieds in 1985, Ann-Maree is now working at importing her third European stallion ‘no inheritances or miracles’, and she survived a couple of divorces along the way!

If you want it, you can do it. Byalee Stables has grown from 5 acres to a beautiful 50-acre stud in the Hunter Valley with a magnificent barn and indoor. As well, Ann-Maree is half of the partnership that is Auction of the Stars with Heath and Rozzie Ryan. Auction of the Stars is Australia’s longest-running and most successful performance horse auction company. Ann-Maree has a reputation for encouraging riders lacking in confidence as shown in her monthly column in Horse Deals, ‘Psyched for Success’.  Ann-Maree has been an accredited NCAS coach with EA for 30 years and is now a specialist Level 3 Dressage Coach and Coach Educator.  She teaches at all levels from 3yos to FEI, as well as riders who haven’t ridden for up to 40 years. Ann-Maree also has more than 25 years of dressage judging to her credit; an advanced level judge currently upgrading to B level (FEI).

Psyched for success: the winning way

Ever wonder how some people begin in the sport and continue on to win, while others are still riding around in circles (literally!) 20 or 30 years later?

Learn how to maximise your chances of winning ‘ in your equestrian life, not just in competitions! What should you do, whose advice should you take, what makes the difference, now is the time to change the future. Ann-Maree takes you through the areas you should consider in your quest to be the best possible rider you can be.

Psyched for success: Believe you can

Don’t believe you can make a difference to your riding life?

Ann-Maree lets you in on some secrets and motivates you to travel further on your own journey by sharing some of the stories of riders who have made good, from those who were too scared to canter to those who thought they weren’t good enough to compete. There’s sure to be someone with whom you identify who can inspire you to greater things in your own riding career!